Law & More is a law firm
aimed at companies and individuals.
The firm acts throughout the Netherlands.

Posted in Uncategorized
by Law and MoreDecember 12, 2019

It happens regularly that drivers of motor vehicles have to answer to the police court in connection with the suspicion of driving under the influence of alcohol. But what about the sentencing for suspected drug driving? Drug use has increased dramatically over the past decades. The consequence of this is that driving under the influence of drugs has also increased. The punishment to be imposed for this has also received more attention.

Only designated drugs have a limit value. Designated drugs are the most commonly found drugs in traffic in the Netherlands. For single use of these substances a behavioural limit applies. The effect of the concentration of the substance used on driving ability is important. With multiple or combined use, the effect on driving ability does not play a role, but the analytical limit of zero applies. However, zero is not measurable. Therefore it comes down to the minimum measurable quantity, which is the limit for multiple or combined use of drugs. 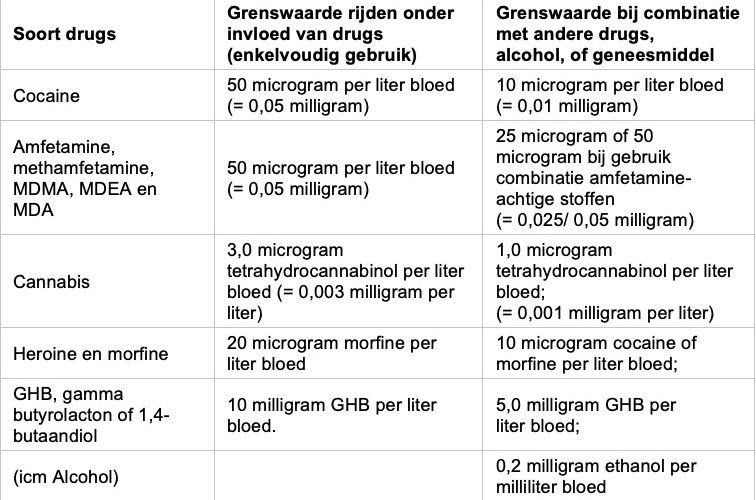 Research on drug use

The police may order you to cooperate with an investigation:

The police have the following options to determine if you have taken drugs:

Does a saliva test or physical examination show that you might have used (too much) drugs? Then the police can ask you to cooperate with a blood test. The blood test can determine the amount and type of drugs. This requires your permission or a warrant for cooperation from the (deputy) Public Prosecutor.

A driver is obliged to cooperate with the investigation after receiving an order from a police officer.

If you refuse to cooperate with an investigation into alcohol or drug use, you are punishable. Refusing a saliva test or breathalyser on the street? Then you commit an offence. You can get a fine for this. It does not apply to the person who was only preparing to drive, but has not actually driven yet.

For blood tests, the police need your permission. Do you not give permission? In that case the Public Prosecutor or Assistant Public Prosecutor or an authorised police officer can issue a cooperation order. You must then cooperate with the blood test. You can also be prosecuted for refusing to cooperate. This is a crime. You can get a fine and/or disqualification from driving.

Please note! Have you previously been convicted of driving under the influence or refusing to cooperate with an alcohol or drug test? A second conviction within 5 years will invalidate your licence.

If the blood sample is used without permission, this is a violation of Article 11 of the Constitution. This article guarantees that everyone can lay claim to the inviolability of his or her body, subject to restrictions to be laid down by or pursuant to law. This constitutional protection of physical integrity should also be respected by a properly acting government. If this bodily integrity is violated without permission, for example by taking blood, and no facts and circumstances have emerged to justify this violation, then the use of the results of the subsequent blood test is inadmissible under all circumstances in the preliminary opinion.

The suspect cannot attach any conditions to the consent given, such as blood samples only being taken by the suspect's own GP.

After the results of the blood test have been announced, the suspect has the right to request a counter test.

The investigating officer is obliged to inform the suspect of his right to undergo a counter check when taking his blood, unless the blood sample is taken after the breath test within the scope of a counter check. In that case, pointing out that right would be superfluous, because the blood test is the counter test and the suspect cannot invoke that right a second time. Moreover, the investigating officer is already obliged to draw his attention to this right after a positive breath test result. The blood sample is then examined again by an expert. The sample must be kept for six months in order to be able to carry out a second test. Based on the decree, the suspect can request a counter test and specify a desired laboratory (from a list of laboratories). The investigator who performs the counter test must perform this test in an equivalent manner to the investigator who performed the initial test. This means, among other things, that the method by which he performs the supplementary examination must be equivalent to that used in the initial examination and that he must be affiliated with an accredited laboratory. For the purpose of the counter test the Netherlands Forensic Institute is obliged to retain the blood sample for at least six months.
However, this obligation only applies if the costs of the counter investigation have been paid by the accused.

If you have been caught driving under the influence of drugs you should consider:

As part of a series of judgments on 6 May 2019, the Court of Appeal of The Hague created clarity by stating the following: 'in contrast to the penalties for driving under the influence of alcohol - the degree of overshoot of the legally formulated limit values in the sentencing process doesn't play a role.

"The court of appeal has to establish that there is no scientifically obtained data available with which the degree of danger caused by the use of this substance can be assessed on the basis of the concentration of the drugs found. This means that only the observation that the analytical limit value has been exceeded can serve as a generally useful starting point for the determination of the punishability of the proven facts. The degree of exceeding must - pending further scientific investigation - be left aside."

The court of appeals then arrived at the following premises:

Combined use of drugs (multiple drugs or alcohol and drugs)

The police are obliged to report immediately to the CBR any incident involving the possession of drugs or driving under the influence of drugs by a driver of a motor vehicle. CBR will then decide within 4 weeks whether a measure should be imposed on the person concerned. In most cases, the CBR will immediately impose a driving suitability test and suspend the validity of the driving licence. This means that the person concerned is not allowed to drive until after the final decision. The entire CBR procedure takes about 4 to 6 months. During this time the person concerned loses his driving licence, unless the police made mistakes or their findings were incorrect. Only then does it make sense to file a notice of objection immediately against the CBR's decision. Unlike in criminal law, it is not the case that CBR or the administrative courts can take personal circumstances into account and return the driving licence sooner. The driving licence can be returned only when the requirements for imposing the measure have not been met, or when the driver has been wrongly marked.

If you have to deal with the CBR, you should consult a lawyer, who can prepare you as well as possible for the psychiatrist's examination. The examination by the psychiatrist is full of trick questions and pitfalls, which can quickly and perhaps wrongly label you as a drug abuser. Research in 2016 has shown that without proper preparation as many as 80 % fail the examination. Your driving licence will then be invalidated for a year. In this sense, prevention is better than cure.

Assisted by a lawyer

In all of the above-mentioned cases, it is important that you have your case assessed by a specialised lawyer as soon as possible. A specialised lawyer can think along with you about a suitable solution to your problem. A lawyer will accompany you to the hearing to represent your interests. An explanation by a specialised criminal lawyer can make all the difference to the further course of the proceedings and the appropriateness of the punishment.

If you are faced with a suspicion of driving under the influence of drugs, contact one of the specialised lawyers at Law & More. We will be happy to inform and assist you.

A lawyer from Law & More can discuss your case with you. During the meeting, the lawyer will discuss with you what he can do for you. If you are to be questioned by the police, your lawyer will prepare you for this, and you can discuss with your lawyer what you can and cannot say. If your driver's license is confiscated, the lawyer can often quickly file a complaint with the court to get your license back.

If you have received a summons for a hearing, it is important that you and your lawyer prepare for the criminal proceedings. The lawyer will request the procedural documents from the prosecutor's office and discuss them with you. Together with you, the lawyer will determine the defense strategy. At each step in the process, the lawyer will guide you and fully prepare you for what to expect.

Posted in Uncategorized
by Law and MoreDecember 26, 2019
Motorists often drive on for some time with a lit light on the dashboard. They'll look at it later...
Read More